Home Headlines Banking crisis breakthroughs win Nobel economics prize for Bernanke, Diamond, Dybvig
Our website publishes news, press releases, opinion and advertorials on various financial organizations, products and services which are commissioned from various Companies, Organizations, PR agencies, Bloggers etc. These commissioned articles are commercial in nature. This is not to be considered as financial advice and should be considered only for information purposes. It does not reflect the views or opinion of our website and is not to be considered an endorsement or a recommendation. We cannot guarantee the accuracy or applicability of any information provided with respect to your individual or personal circumstances. Please seek Professional advice from a qualified professional before making any financial decisions. We link to various third-party websites, affiliate sales networks, and to our advertising partners websites. When you view or click on certain links available on our articles, our partners may compensate us for displaying the content to you or make a purchase or fill a form. This will not incur any additional charges to you. To make things simpler for you to identity or distinguish advertised or sponsored articles or links, you may consider all articles or links hosted on our site as a commercial article placement. We will not be responsible for any loss you may suffer as a result of any omission or inaccuracy on the website. 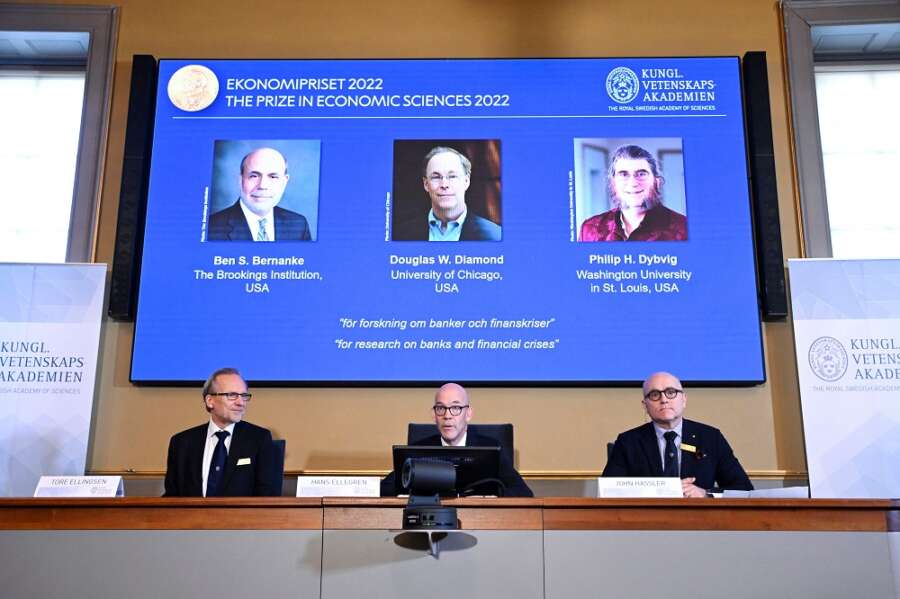 By Simon Johnson and Johan Ahlander

STOCKHOLM (Reuters) – A trio of U.S. economists including former Federal Reserve Chair Ben Bernanke won this year’s Nobel Economics Prize on Monday for laying the foundation of how world powers now tackle global crises like the recent pandemic or the Great Recession of 2008.

The trio, who also include Douglas Diamond and Philip Dybvig, won for their research on how regulating banks and propping up failing lenders with public cash can stave off an even deeper economic crisis, such as the Great Depression of the 1930s.

“The actions taken by central banks and financial regulators around the world in confronting two recent major crises – the Great Recession and the economic downturn that was generated by the COVID-19 pandemic – were in large part motivated by the laureates’ research,” the Swedish Academy said in announcing this year’s prize winners.

Governments around the world bailed out banks in 2008 and 2009, generating a torrent of criticism as ordinary consumers suffered with many losing their homes even as banks, a key culprit of the crisis, were saved.

But society on the whole benefited and the bailouts, even if morally questionable to some, likely prevented more pain, the laureates’ research suggests.

“Even though these bailouts have problems, … they could actually be good for society,” Diamond, a University of Chicago professor, told a news conference with the Swedish Academy, arguing that preventing the collapse of investment bank Lehman Brothers would have made the crisis less severe.

“It probably would have been better if Lehman Brothers had not collapsed unexpectedly,” Diamond said. “Had they found a way I think the world would have had less of a severe crisis.”

Ironically Bernanke was the chair of the U.S. Federal Reserve at the time of Lehman’s collapse in 2008, which became one of the main catalysts of the world’s biggest financial turmoil since the 1930s.

Bernanke, now a fellow at the Brooking Institution, argued at the time that there was no legal way to save Lehman so the next best thing was to let it fail and use the government’s financial resources to prevent wider systemic failures.

Part of that response, including ultra low interest rates and massive central bank asset buys are being reversed now as inflation is at its highest level in around a half a century in many parts of the world.

The trio’s work also has implications for the current economic turmoil as raising interest rates at a record pace to fight inflation amplifies recession risks that will inevitably challenge the financial sector.

“Some households and some firms are already weakened,” Gernot Doppelhofer, professor at the economics department of the Norwegian School of Economics (NHH) said.

“This research shows how the finance system can amplify shocks and how it’s important to try to stabilise the economy while also ensuring the stability of the financial system,” he added.

“What Bernanke did was to show that banks played a central role in turning relatively small recessions into the depression in the 30s, and that was the worst economic crisis that the world has seen ever since,” John Hassler, professor of economics and a member of the Nobel Prize for Economics committee, said.

Bank runs can easily become self-fulfilling leading to the collapse of an institution and putting the entire financial sector at risk.

Dybvig, a professor at Washington University in St. Louis, and Diamond argued that banks taking short-term deposit and lending this cash out in the long term is the most efficient way for the financial sector to operate.

But such an arrangement also made them prone to runs. Risks would then be reduced via “delegated monitoring” where banks act as intermediaries between savers and borrowers.

This spreads risks and ensures efficiency as banks are better suited to assess creditworthiness and monitor the use of funds, the Academy said.

The three economists will receive an equal share of the 10 million Swedish crown ($885,000) prize money.

They join such luminaries as Paul Krugman and Milton Friedman, previous winners of the prize.

The majority of previous laureates have been from the United States.

The economics prize is not one of the original five awards created in the 1895 will of industrialist and dynamite inventor Alfred Nobel.

It was established by Sweden’s central bank and first awarded in 1969, its full and formal name being the Sveriges Riksbank Prize in Economic Sciences in Memory of Alfred Nobel.

A separate Factbox lists all this year’s winners of the Nobel prizes.

November 30, 2022
Editorial & Advertiser disclosureEditorial & Advertiser disclosureOur website provides you with information, news, press releases, Opinion and advertorials on various financial products and services. This is not to be considered as financial advice and should be considered only for information purposes. We cannot guarantee the accuracy or applicability of any information provided with respect to your individual or personal circumstances. Please seek Professional advice from a qualified professional before making any financial decisions. We link to various third party websites, affiliate sales networks, and may link to our advertising partners websites. Though we are tied up with various advertising and affiliate networks, this does not affect our analysis or opinion. When you view or click on certain links available on our articles, our partners may compensate us for displaying the content to you, or make a purchase or fill a form. This will not incur any additional charges to you. To make things simpler for you to identity or distinguish sponsored articles or links, you may consider all articles or links hosted on our site as a partner endorsed link.