Home Headlines France’s Ernaux, who long scrutinised self, wins Nobel literature prize
Our website publishes news, press releases, opinion and advertorials on various financial organizations, products and services which are commissioned from various Companies, Organizations, PR agencies, Bloggers etc. These commissioned articles are commercial in nature. This is not to be considered as financial advice and should be considered only for information purposes. It does not reflect the views or opinion of our website and is not to be considered an endorsement or a recommendation. We cannot guarantee the accuracy or applicability of any information provided with respect to your individual or personal circumstances. Please seek Professional advice from a qualified professional before making any financial decisions. We link to various third-party websites, affiliate sales networks, and to our advertising partners websites. When you view or click on certain links available on our articles, our partners may compensate us for displaying the content to you or make a purchase or fill a form. This will not incur any additional charges to you. To make things simpler for you to identity or distinguish advertised or sponsored articles or links, you may consider all articles or links hosted on our site as a commercial article placement. We will not be responsible for any loss you may suffer as a result of any omission or inaccuracy on the website. 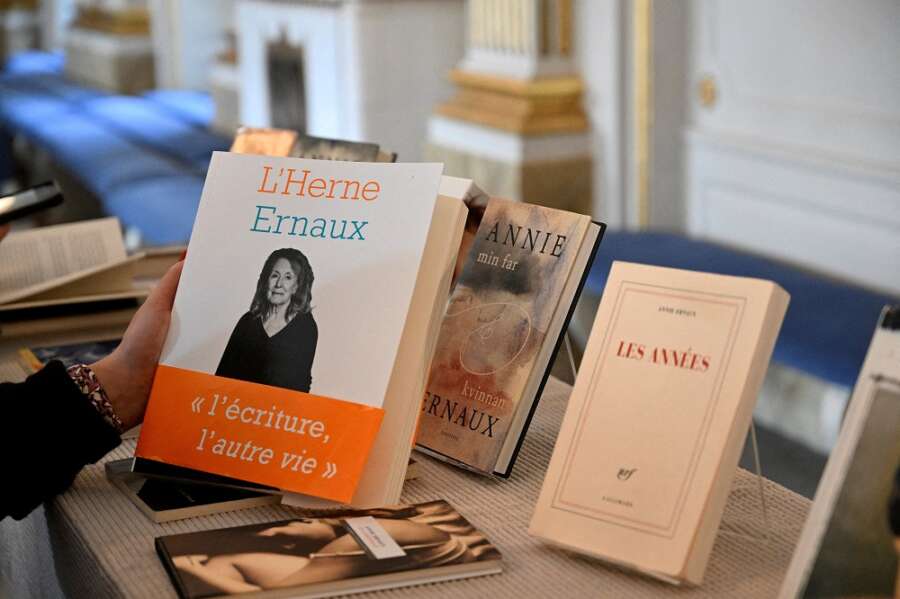 In explaining its choice, the Swedish Academy said Ernaux, 82, “consistently and from different angles examines a life marked by strong disparities regarding gender, language and class”.

Ernaux, the first French woman to win the literature prize, said winning the award was “immense”.

She has previously said that writing is a political act, opening our eyes to social inequality. “And for this purpose she uses language as ‘a knife’, as she calls it, to tear apart the veils of imagination,” the academy said.

Her debut novel was “Les Armoires Vides” in 1974 but she gained international recognition following the publication of “Les Années” in 2008, translated into English as “The Years” in 2017.

“It is her most ambitious project, which has given her an international reputation and a raft of followers and literary disciples,” the academy said of that book.

By substituting in her narrative “the spontaneous memory of the self with the third person of collective memory”, the academy said of “The Years”, Ernaux merges together the personal and collective memory.

Born to a modest family of grocers from Normandy in northern France, Ernaux writes in a frank, direct style about class and how she struggled to adopt the codes and habits of the French bourgeoisie while staying true to her working class background.

An adaptation of Ernaux’s 2000 novel “Happening”, about her experiences of having an abortion when it was still illegal in France in the 1960s, won the Golden Lion at the Venice Film Festival in 2021.

“I did not imagine at the time that 22 years later, the right to abortion would be challenged,” Ernaux told reporters in Paris. “Until my last breath, I will fight for women’s right to choose whether they want to be a mother or not.”

Ernaux also touched on the political power won by the far right in countries around Europe in recent years, saying “the extreme right in history has never been favourable to women”.

The academy said her “clinically restrained narrative” about a 23-year-old narrator’s abortion remained a masterpiece among her works.

“It is a ruthlessly honest text, where in parentheses she adds reflections in a vitally lucid voice, addressing herself and the reader in one and the same flow,” the academy said.

Jason Whittaker, head of English and Journalism at University of Lincoln in Britain, said the prize should bring more attention to the genre of women’s autobiography, “which is very often overlooked in what is still a male-dominated sphere”.

Similarly to when Polish writer Olga Tokarczuk won the 2018 prize, the recognition given to Ernaux’s work would attract readers in English, he said.

“She’s been a very important contributor in terms of memoir and autobiographical work,” he told Reuters. “In terms of her contribution to global literature, it’s really important in placing innovation and interesting techniques in women’s memoir at the centre of literary writing.”

Seven Stories Press, Ernaux’s U.S. publisher of 31 years, said it published the English translation of her most recent book, “Getting Lost”, just two days before she won the Nobel, and was now rushing several of her backlist titles to press.

Publisher Dan Simons said in a statement that Ernaux “has stood up for herself as a woman, as someone who came from the French working class, unbowed, for decade after decade”.

In picking Ernaux, he said, the Swedish Academy had made a brave choice of “someone who writes unabashedly about her sexual life, about women’s rights and her experience and sensibility as a woman”.

Former French Culture Minister Roselyne Bachelot wrote on Twitter that Ernaux is “a writer who has put the autobiographical mode in its cold analytical way at the heart of her career. One may not agree with her political options but one must salute a powerful and moving work”.

The prizes for achievements in science, literature and peace were established in the will of Swedish chemist and engineer Alfred Nobel, whose invention of dynamite made him rich and famous, and have been awarded since 1901.

Some prizes have gone to writers from outside mainstream literary genres, including French philosopher Henri Bergson in 1927, British Prime Minister Winston Churchill in 1953 and American singer-songwriter Bob Dylan in 2016.

“I always said that I did not want to get the Nobel prize,” she told reporters at her French publisher Gallimard’s office.

“Because once you get it, afterwards you always have that badge attached to your name, and I fear that it could mean one no longer evolves once one’s statue is made.”

November 30, 2022
Editorial & Advertiser disclosureEditorial & Advertiser disclosureOur website provides you with information, news, press releases, Opinion and advertorials on various financial products and services. This is not to be considered as financial advice and should be considered only for information purposes. We cannot guarantee the accuracy or applicability of any information provided with respect to your individual or personal circumstances. Please seek Professional advice from a qualified professional before making any financial decisions. We link to various third party websites, affiliate sales networks, and may link to our advertising partners websites. Though we are tied up with various advertising and affiliate networks, this does not affect our analysis or opinion. When you view or click on certain links available on our articles, our partners may compensate us for displaying the content to you, or make a purchase or fill a form. This will not incur any additional charges to you. To make things simpler for you to identity or distinguish sponsored articles or links, you may consider all articles or links hosted on our site as a partner endorsed link.