Home Headlines Analysis-How China’s Xi accumulated power, and why it matters in a third term
Our website publishes news, press releases, opinion and advertorials on various financial organizations, products and services which are commissioned from various Companies, Organizations, PR agencies, Bloggers etc. These commissioned articles are commercial in nature. This is not to be considered as financial advice and should be considered only for information purposes. It does not reflect the views or opinion of our website and is not to be considered an endorsement or a recommendation. We cannot guarantee the accuracy or applicability of any information provided with respect to your individual or personal circumstances. Please seek Professional advice from a qualified professional before making any financial decisions. We link to various third-party websites, affiliate sales networks, and to our advertising partners websites. When you view or click on certain links available on our articles, our partners may compensate us for displaying the content to you or make a purchase or fill a form. This will not incur any additional charges to you. To make things simpler for you to identity or distinguish advertised or sponsored articles or links, you may consider all articles or links hosted on our site as a commercial article placement. We will not be responsible for any loss you may suffer as a result of any omission or inaccuracy on the website.

Analysis-How China’s Xi accumulated power, and why it matters in a third term 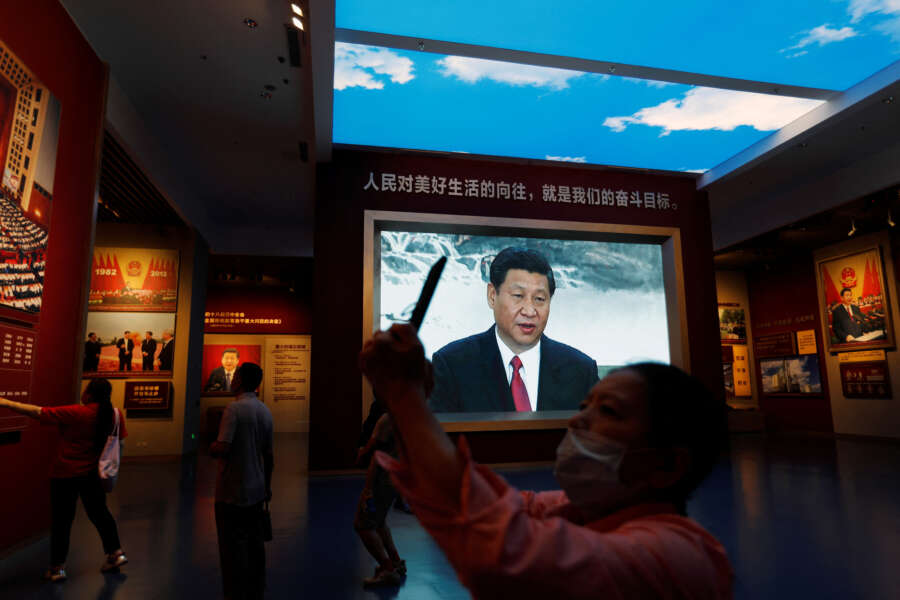 BEIJING (Reuters) – One of Xi Jinping’s first moves after winning China’s top job as general secretary of the Communist Party in 2012 was to reinstate regular “democratic life sessions” with fellow leaders in the 25-member Politburo, a staple of the Mao Zedong era.

Restoring the practice, which entails self-criticism in front of the general secretary, marked a small but symbolic example of how Xi has departed from China’s collective leadership of recent decades and accumulated power unseen since Mao’s time.

Xi, 69, is widely expected to break with precedent at the ruling Communist Party Congress that starts Oct. 16 and extend his decade-long leadership for another five years – or beyond – cementing the party’s resurgence across all aspects of China, with Xi officially its “core”.

While the exact make-up of the next Politburo Standing Committee will give clues as to just how much Xi has neutralised what is left of opposing factions, few party-watchers expect significant change in direction or approach.

Rather, Xi is set to maintain or tighten his control, analysts say, a concentration of power that has seen increasingly dogmatic policy implementation that risks unintended consequences as competing views and feedback are discouraged or quashed.

Critics point to China’s persistence with policies despite blowback, whether on COVID, an abrasively aggressive diplomacy or stifling of the once-vibrant “platform” economy as evidence of the risks of increasingly authoritarian rule.

The irony, said former party insider Wu Guoguang, is that a leader who has gained power suppressing opposition inevitably feels insecure and is thus unwilling to share power or change course.

“Xi would fear that any self-correction could be used by potential enemies to topple him,” said Wu, who is now a senior researcher at California’s Stanford University.

While some party-watchers said China may tweak some policies following the Congress – “adjusting with the times”, in party-speak – they expect Beijing to maintain its broad direction in the coming years under Xi.

“Xi has had a very difficult time changing course. This is a weakness,” said Ashley Esarey, a political scientist at the University of Alberta.

The expected absence of a clear successor will also enable Xi to rule unchallenged but potentially ratchets up risk the longer he stays in power.

“Arguably, Xi’s reluctance to empower a younger successor and moves to break norms of collective leadership have also made China less resilient as the country sails into an increasingly uncertain future,” Esarey said.

Xi’s power consolidation appears to be unimpeded by challenges that have coalesced in a chaotic year, from a stumbling economy to an increasingly out of step zero-COVID policy and support for Russia’s Vladimir Putin.

In his decade at the helm, Xi has prioritised security, expansion of the state’s economic role, a strengthening military, a more assertive foreign policy and intensifying pressure to seize Taiwan.

When elders picked Xi to be leader, the son of a Communist Party revolutionary was considered a safe choice to put the party first and refresh an institution that had grown sclerotic with corruption and less relevant in a liberalising economy.

Xi’s elevation to the Politburo Standing Committee in 2007 fuelled hopes among liberals and western governments that he may be a reformer. After all, his father had helped then-leader Deng Xiaoping to implement China’s landmark reform and opening up when he was Guangdong province party secretary.

RISE OF THE AUTHORITARIAN

But Xi took his party-saving mandate seriously, putting the party squarely back into the centre of life in China, and himself at the centre of the party.

In the name of fighting corruption and restoring public faith in the party, 4.7 million officials had been investigated under Xi as of April 2022. Many were purged, including rivals for power like the popular former Chongqing party chief Bo Xilai. Such moves had the benefit of rooting out political enemies and promoting his own people into newly vacant jobs – while winning public support.

Xi also oversaw a crushing of dissent and forbade “disrespectful” discussion about the party among members. All comments critical of Xi were scrubbed from the internet.

In 2016 he made himself the “core” of the party and in 2018 he ditched the two-term limit on the presidency, clearing the way to rule for life.

Official scholars argue a country as big and diverse as China requires a strong central authority, and strong leader, to get things done and prevent chaos.

They point to China’s success at poverty alleviation, its efficiency at building infrastructure and organising events such as this year’s Beijing Winter Olympics, and the effectiveness at extinguishing COVID outbreaks.

“Part of the story is that when he came to power many within the CCP hoped for a stronger response to the increasingly severe challenges it faced,” said Joseph Torigian, an assistant professor at American University and expert on authoritarian politics.

He said while the party is not incapable of course correction, many people at the top are products of the same system as Xi and it is likely that they share similar views.

Dali Yang, professor of Chinese politics at the University of Chicago, said while Xi is inclined towards wielding autocratic power he may feel compelled to be more compromising in a third term, especially given a growing backlash to zero-COVID policies.

“Before the latest COVID outbreak, even when his policies inflicted pain, people largely supported them. Today, with the economy in doldrums, and with the country stuck in zero-COVID, he may have to be more open to different ideas,” he said.

Taiwan says war with China ‘absolutely’ not an option, but bolstering defences