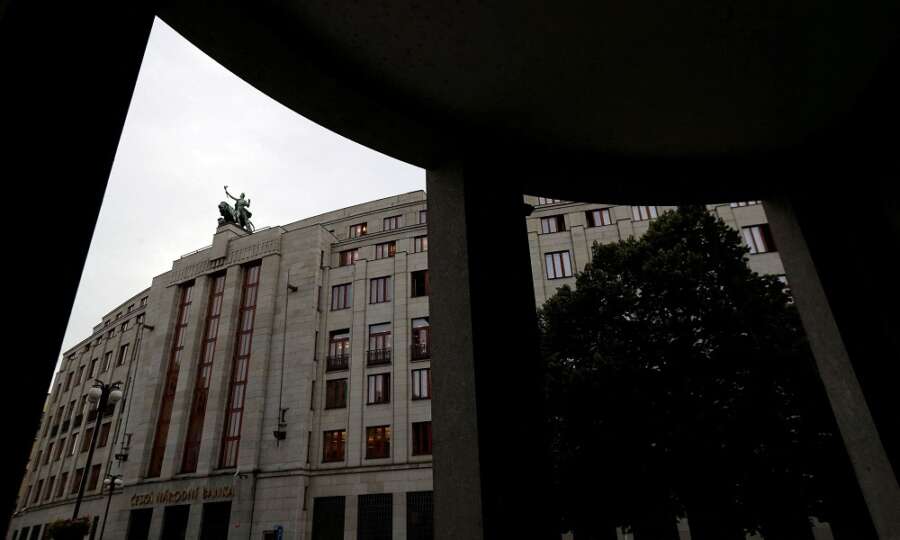 By Gergely Szakacs and Alan Charlish

BUDAPEST/WARSAW (Reuters) – Russia’s invasion of Ukraine is putting pressure on central banks along the European Union’s eastern flank to prop up their weakening currencies, forcing Czech and Polish rate-setters into market interventions and Hungary into prolonged rate hikes.

The market sell-off in the wake of the Russian invasion on Feb. 24 and a looming energy price shock in Europe due to a surge in global oil and gas prices compound already strong underlying price pressures in the region, and the currencies’ sharp weakening could fuel additional inflation.

Economists say against this backdrop, the region’s central banks – which have been fighting inflation with rate hikes since June 2021 – have little choice now but to intervene as needed and tighten policy further even as the growth outlook is set to deteriorate as a result of the military conflict.

“The implications of the conflict for CEE-4 monetary policy are firmly hawkish, in our view,” economists at Goldman Sachs said.

“While the crisis is likely to have a dampening effect on growth, the combination of higher commodity prices and FX depreciation is significantly inflationary.”

“Moreover, this pro-inflationary shock is occurring at a time when CEE-4 central banks have been trying to tighten financial conditions to bring exceptionally high inflation rates under control. The recent depreciation of CEE-4 exchange rates is making this task more difficult.”

Goldman Sachs has raised its forecast for peak official rates by 50 bps to 5.5% in Poland, Hungary, the Czech Republic and Romania.

On Friday, the Czech National Bank (CNB) intervened in the market against excessive volatility and crown depreciation, its first such move since abandoning a cap on the Czech currency in 2017, lifting the unit from 10-month-lows.

The CNB, which said “it is active on the foreign exchange market and is conducting operations to mitigate excessive fluctuations and depreciation of the crown”, followed the Polish central bank in intervening on Friday.

The Czech central bank has already raised rates by 425 basis points since last June to bring its rate to a 20-year high of 4.5% and analysts see chances the bank will raise rates by up to 50 basis points at its next meeting in late March.

Despite those moves, all three currencies, which started the year on a strong footing, have remained in the red for the year, with the zloty trading at 13-year-lows. The forint plumbed record lows this week, falling to 385.97 versus the euro by Friday afternoon from 372 on Monday.

Central banks cannot do anything other than remain hawkish in the near term, economists at Wood and Co. said in a note, projecting a 2 percentage point drop in 2022 economic growth compared to their previous baseline due to the inflation shock.

“There is a high risk of double-digit inflation this year, moderating, but staying two-to-three times the central banks’ targets in 2023E,” they said.

The central bank has denied comment but it has a long track record of FX interventions to stem large currency volatility.

The National Bank of Poland meets next Tuesday when it is expected to raise its key rate by 50 bps to 3.25%.

The National Bank of Hungary holds a non-rate setting meeting on Tuesday, which some economists expect to turn into a rate-setting meeting after the bank exhausted its room for manoeuvre with Thursday’s massive hike.

The bank raised its one-week deposit rate to 5.35%, just 5 bps shy of the top of its interest rate corridor.

Economists at UniCredit said the NBH could also end up having to intervene this year if government price caps to keep a lid on inflation, which rose to a near 15-year-high in January, are removed after an April general election.

“We believe that rate hikes cannot strengthen the currency on their own. If EUR/HUF remains close to 380 for longer, the FX pass-through could exceed 1pp,” UniCredit said. The NBH has declined comment on direct market interventions.

(Additional reporting by Jason Hovet in PRAGUE and Luiza Ilie in BUCHAREST; Editing by Elaine Hardcastle)