Home Headlines British pensions step up multi-billion-pound asset fire sale as need for cash soars
Our website publishes news, press releases, opinion and advertorials on various financial organizations, products and services which are commissioned from various Companies, Organizations, PR agencies, Bloggers etc. These commissioned articles are commercial in nature. This is not to be considered as financial advice and should be considered only for information purposes. It does not reflect the views or opinion of our website and is not to be considered an endorsement or a recommendation. We cannot guarantee the accuracy or applicability of any information provided with respect to your individual or personal circumstances. Please seek Professional advice from a qualified professional before making any financial decisions. We link to various third-party websites, affiliate sales networks, and to our advertising partners websites. When you view or click on certain links available on our articles, our partners may compensate us for displaying the content to you or make a purchase or fill a form. This will not incur any additional charges to you. To make things simpler for you to identity or distinguish advertised or sponsored articles or links, you may consider all articles or links hosted on our site as a commercial article placement. We will not be responsible for any loss you may suffer as a result of any omission or inaccuracy on the website. 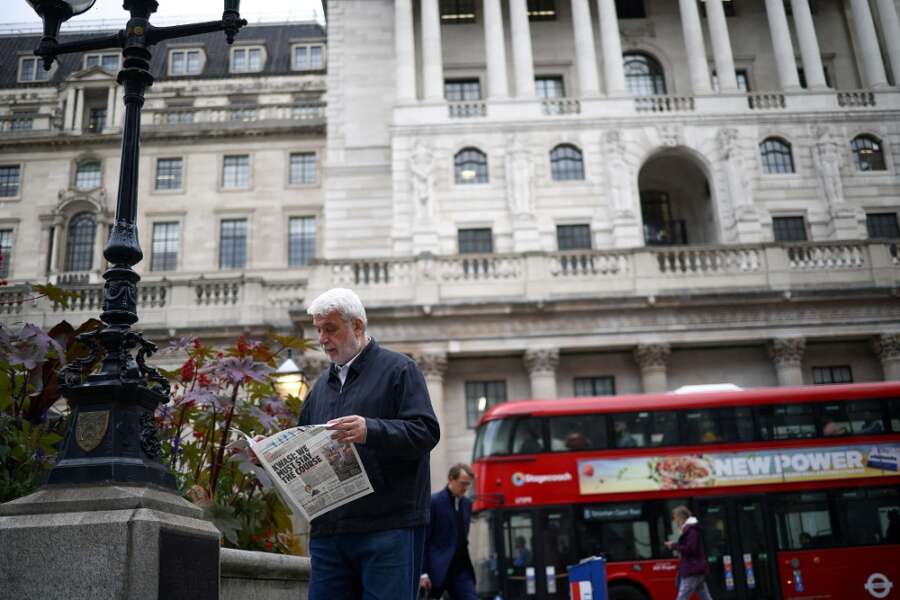 By Tommy Wilkes and Carolyn Cohn

LONDON (Reuters) – UK pension schemes are racing to raise hundreds of billions of pounds to shore up derivatives positions before the Bank of England calls time on support aimed at keeping them afloat.

The Bank of England plans to stop buying bonds on Oct. 14, leaving pension schemes scrambling to meet a collective cash call estimated to be at least 320 billion pounds ($355 billion) without a buyer of last resort.

The central bank on Tuesday made its fifth attempt in just over two weeks to try and restore order in markets, after a surge in yields on Sept. 28 threatened to overwhelm pension schemes that had loaded up on leveraged derivatives.

Pension funds have spent the past two weeks trying to raise cash by selling off UK government, index-linked and corporate bonds but the fundraising task is intensifying, sources say.

“This week with the gilt market not fully calmed, lots (of schemes) are now looking at this and saying we actually need to do a bit more and so there is renewed action to get even more collateral across,” said Steve Hodder, a partner at pension consultants Lane Clark & Peacock.

Estimates of how much pension funds need to sell range but are in the hundreds of billions of pounds, although it is not known how much in assets schemes have sold already. Some schemes will also be cutting their LDI exposure if they can’t meet the collateral demands, consultants say.

The latest BoE intervention on Tuesday was targeted at buying bonds in the index-linked market, a far smaller market than gilts, dominated by pension funds and which suffered another significant selloff this week.

The Pensions and Lifetime Savings Association on Tuesday called for the BoE to consider continuing its emergency bond-buying programme to Oct. 31 “and possibly beyond”.

LDI helps schemes match their liabilities – what they owe members – with assets. Pension funds were previously putting up cash to withstand a move in government bond yields of 100 to 150 basis points — normally a huge safety net, but which has been wiped out by some of the most volatile days on record.

Those collateral buffer demands increased to 300 basis points last week, consultants and pension industry experts said. Some schemes have even been asked for 500 basis points this week amid more jumps in bond yields, although that amount remains rare.

The scramble for cash in the 1.6 trillion pound LDI industry, which soared in popularity among Britain’s defined benefit schemes during a decade of low interest rates, is forcing pension funds to dump government and corporate bonds and even to exit from less liquid assets such as property and private equity.

In an indication of market stress, Barclays said on Tuesday it would make extra liquidity available to its LDI counterparties as part of the BoE’s Oct. 10 launch of an expanded repo facility. The facility allows schemes to park more assets including low-rated corporate bonds in return for cash.

He estimates that after further volatility in yields in the past two days and the industry’s higher collateral requirements, the total cash funds now need to post could be 320 billion pounds or higher.

“We are definitely not there,” he said, referring to whether funds were close to raising the required cash by selling assets. He described last week as “one of the biggest ever for sell orders. You are seeing more sales this week.”

The increased need for collateral was driven by pressure from regulators led by the Bank of England to prevent further stresses on the system, said Hemal Popat, partner, investments at Mercer.

He estimates pension funds could sell assets totalling around 300 billion pounds as they adjust hedging positions, although it is not clear how much they may have sold already. He estimated 100 billion pounds could come from gilts and the rest from assets such as global credit, global equities and asset-backed securities.

Liquidity in government bond markets remained poor, and yields were likely to climb further whether the BoE extended its bond-buying on Friday or not, said Craig Inches, Head of Rates and Cash at Royal London Asset Management.

“The bottom lime is a lot of schemes needs to rebalance their portolios,” he said. “That is not going to stop and will take time.”

Germans told to unite over energy crisis amid EU divisions

Factbox-Ticking bomb: The risks the IMF sees to financial stability