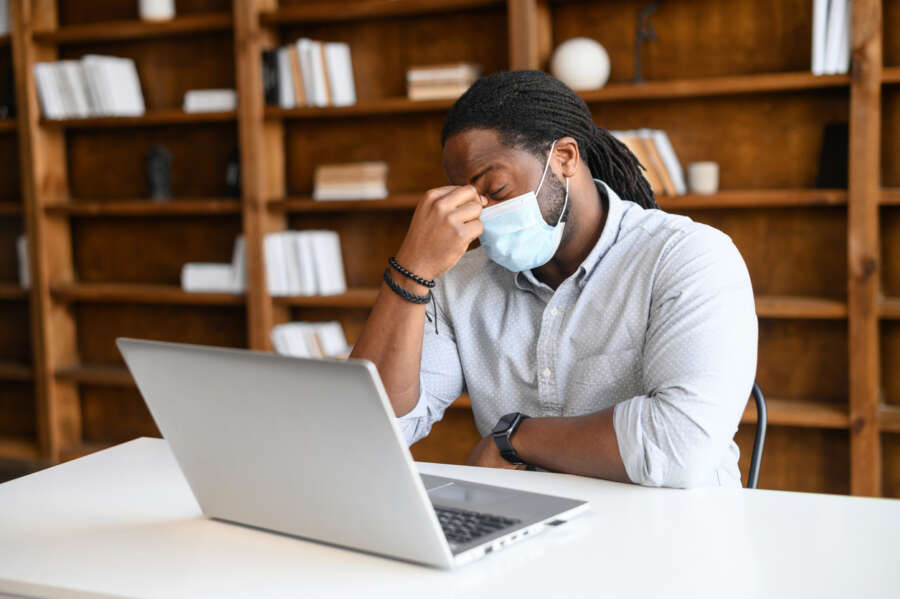 If you hate your job, you’re not alone as new research has discovered that almost half of young Brits (45 percent) feel trapped in a job they can’t stand.

According to the research, over a third (36 percent) of 20- to 35-year-olds admit they’re desperate to quit their job but can’t afford to, while 38 percent say they have no hope of getting a promotion or moving sideways to a more interesting position at their current company.

43 percent spend the whole day clock watching, while 29 percent admit the end of the weekend is ruined with “Sunday night blues” – the dread of going back to work the following day.

Yet the study of 1,500 20- to 35-year-olds, commissioned by the Open University, suggests it’s difficult to find something new, as 28 percent feel they fell into a career path they can’t get out of. A quarter of young people are desperate to quit their current jobs but are struggling to find something else.

To find a potential solution to the problems that many young people are facing with their career, and to show the realities of new career challenges, the Open University are launching an ‘Unlock Your Inner Boss LIVE’ challenge, where they will put TV and Radio presenter Gemma Cairney through her paces at the helm of a new business for the day, and will live stream the activity across their social channels.

Interestingly, 82 percent of young people said they dream of being their own boss, while four in ten (41 percent) said given the chance they would like to start up their own business. In fact, three-quarters describe themselves as having an entrepreneurial spirit and reckon they have what it takes to be successful.

When it comes to ‘side hustles’ or an occupation that is undertaken in addition to one’s regular employment, 37 percent of respondents say they already have one. A third of young people that don’t already have a side hustle want one and 21 percent claim to be planning their ‘side hustle’ now.

“It’s amazing to see the positive entrepreneurial attitude that young people in the UK have. Lots of young people know they have the potential to do bigger and better things but are unsure how to access their dream job. We hope the OU can be the solution to the problems that some of the younger generations are facing, flexible studying hours give OU students the ability to ‘earn while they learn’ and offer a chance to upskill to land their dream job whilst pursuing a side hustle at the same time.

“The OU has a proven track record of helping people achieve their dream careers. It’s the largest University in the UK and has produced more CEOs than any other University. Continuing to build your skillset is a must for these go–getters, so they can achieve the career goals they want.  We think education should be considered as an option for every stage of life, the sky really is the limit.”

“I’m thrilled to be taking part in the OU’s ‘Unlock Your Inner Boss’ LIVE challenge and be put through my paces, as my own boss in a new ‘business’. It’s brilliant to see that young people today have such positive mindsets about feeling entrepreneurial – they clearly want to take control of their careers and so many are planning their own side hustles. Hopefully watching me in the UYIB challenge will show that everyone is capable of achieving their dream job, given the right mindset and support. I’ve always considered myself to have an entrepreneurial mindset and I can’t wait to see what challenges the day has to offer!”

The research also found that, unsurprisingly, three in ten young working Brits (31 percent) say they live for the weekend. The problems have been exacerbated by the return to the office, with three in ten saying returning to the workplace after working from home has made their job so much worse, with 35 percent admitting they’re missing the flexibility that home working provided.

The research also found that on average, young working Brits who are stuck in dead-end jobs believe they are only using 39 percent of their full potential talent, this means that 27 percent are sticking to their current role solely for the income. As a result, over a quarter (26 percent) of young working Britons struggle to stay awake at the office – with 21 percent saying they work to live, instead of living to work. In fact, a fifth said the morale at the company they work at is at rock bottom, with 16 percent having a nightmare boss who they feel micromanages them.

Meanwhile, 13 percent admit sometimes they cry in the toilets because they feel so stressed out, with one in ten saying they can’t leave work on time, or their manager will think they’re not working hard enough.

The research has also uncovered the barriers behind finding your dream job – with 43 percent of young Britons admitting that despite all the difficulties with their current position, they still have NO IDEA what their dream career is.

31 percent say they can’t afford the training required, while 24 percent don’t have the skills required for their dream job. While almost a fifth (19 percent) admit they don’t know which skills they need for their ideal career.

Over a third are interested in upskilling in order to progress further in their current role, while 36 percent want to change careers by retraining in something completely different. One-fifth feel they would benefit from a better understanding of business management, while 16 percent are adamant they would like to develop their computer skills. Meanwhile, 17 percent said upskilling their IT expertise would be crucial for them to make their career dreams come true.

And when it comes to switching careers, 17 percent think the more time goes on and the more senior you become, it only gets harder and harder to make a change. 16 percent have regrets about starting their career and not being brave enough to go for a job they really wanted. However, 14 percent claim they just need a boss who will give them a chance when it comes to working to their full potential.

Tune in to the Open University’s Unlock Your Inner Boss LIVE – The CEO challenge on the 25th May and watch Gemma tackle the challenge live on Facebook, Linkedin or YouTube.

July 8, 2021
Editorial & Advertiser disclosureEditorial & Advertiser disclosureOur website provides you with information, news, press releases, Opinion and advertorials on various financial products and services. This is not to be considered as financial advice and should be considered only for information purposes. We cannot guarantee the accuracy or applicability of any information provided with respect to your individual or personal circumstances. Please seek Professional advice from a qualified professional before making any financial decisions. We link to various third party websites, affiliate sales networks, and may link to our advertising partners websites. Though we are tied up with various advertising and affiliate networks, this does not affect our analysis or opinion. When you view or click on certain links available on our articles, our partners may compensate us for displaying the content to you, or make a purchase or fill a form. This will not incur any additional charges to you. To make things simpler for you to identity or distinguish sponsored articles or links, you may consider all articles or links hosted on our site as a partner endorsed link.