Home Headlines King Charles to fly to Scotland to join sombre procession of queen’s coffin
Our website publishes news, press releases, opinion and advertorials on various financial organizations, products and services which are commissioned from various Companies, Organizations, PR agencies, Bloggers etc. These commissioned articles are commercial in nature. This is not to be considered as financial advice and should be considered only for information purposes. It does not reflect the views or opinion of our website and is not to be considered an endorsement or a recommendation. We cannot guarantee the accuracy or applicability of any information provided with respect to your individual or personal circumstances. Please seek Professional advice from a qualified professional before making any financial decisions. We link to various third-party websites, affiliate sales networks, and to our advertising partners websites. When you view or click on certain links available on our articles, our partners may compensate us for displaying the content to you or make a purchase or fill a form. This will not incur any additional charges to you. To make things simpler for you to identity or distinguish advertised or sponsored articles or links, you may consider all articles or links hosted on our site as a commercial article placement. We will not be responsible for any loss you may suffer as a result of any omission or inaccuracy on the website. 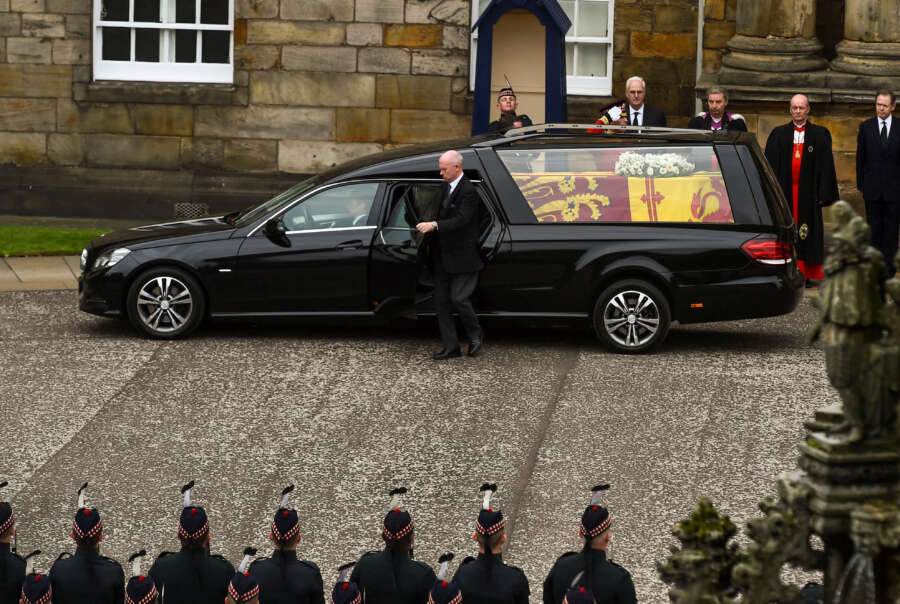 By Michael Holden and Andrew MacAskill

EDINBURGH (Reuters) – Britain’s King Charles will fly to Edinburgh to join his siblings on Monday when the coffin of his mother Queen Elizabeth is taken in a solemn procession from one of her Scottish palaces to the city’s historic St. Giles cathedral.

The new monarch will also join senior royals for a vigil at the church where the coffin will lie at rest before being flown to London on Tuesday.

Since Elizabeth’s death aged 96 at Balmoral Castle, her Scottish holiday home, a carefully choreographed series of plans to mourn Britain’s monarch of 70 years has been put into operation.

On Sunday, her oak coffin, draped in the Royal Standard of Scotland with a wreath on top, was taken by hearse on a six-hour journey from Balmoral through picturesque Scottish countryside, villages, small towns and cities to Edinburgh.

Tens of thousands of well-wishers lined the roads to pay their respects, while huge crowds, some in tears, gathered in Edinburgh to greet the cortege.

“It’s just very sad,” said Rachel Lindsay, 24. “I don’t think we expected it to ever happen. I just thought she’d live forever. I didn’t think it was real until I saw it.”

Before setting off for Scotland, Charles, 73, who automatically became king of the United Kingdom and 14 other realms of including Australia, Canada, Jamaica, New Zealand and Papua New Guinea, will travel to the British parliament for another traditional ceremony.

At Westminster Hall, lawmakers from both the House of Commons and the upper House of Lords will express their condolences for the death of his mother, and the new king will deliver a response.

He will then fly to Edinburgh with his wife Camilla, the Queen Consort, to join his sister Anne, and brothers Andrew and Edward.

The queen’s children will then walk in a procession behind the hearse as the coffin of their mother is taken to St Giles’ Cathedral, flanked by soldiers.

When it arrives at the church, the Duke of Hamilton and Brandon, the premier Scottish peer, will place the Crown of Scotland on the coffin.

After a service, the coffin will rest at the cathedral for 24 hours to allow people to pay their respects. A continuous vigil will be mounted by soldiers from the Royal Company of Archers – the sovereign’s ‘Body Guard in Scotland’.

Charles, who will also visit the Scottish parliament and meet Scotland’s First Minister Nicola Sturgeon, will later mount a vigil at 7.20 p.m. (1820 GMT) along with other royals.

On Tuesday, the coffin will be flown to London where on Wednesday it will begin a period of lying in state until early on Sept. 19 – the day of Elizabeth’s state funeral – on a catafalque at Westminster Hall.

It will be guarded constantly by soldiers or by Yeoman Warders – known as beefeaters – from the Tower Of London.

Members of the public will be allowed to process past the coffin, which will be covered by the Royal Standard with the sovereign’s Orb and Sceptre placed on top, for 24 hours a day until 6.30 a.m. (0530 GMT) on Sept. 19.

“Those wishing to attend will be required to queue for many hours, possibly overnight,” the government said in a statement. “Large crowds are expected and people are encouraged to check ahead, plan accordingly and be prepared for long wait times.”

Meanwhile thousands of people are continuing to gather at royal palaces across Britain, bringing bouquets of flowers. In Green Park near London’s Buckingham Palace, where some of the tributes are being taken, long lines of bouquets now snake around the park allowing mourners to read the tributes.

Other well-wishers have attached their messages of condolence to trees.

Britain last saw such an display of public mourning in 1997 following the death of Charles’s first wife, Princess Diana, after she was killed in a car crash in Paris.

“It reminds me of Diana 25 years ago,” Helen Soo, 59, said. “I was much younger in those days, I slept overnight in Hyde Park and this is multiplied by 100 probably.”

(Reporting by Michael Holden in London and Andrew MacAskill in Edinburgh; additional reporting by Kate Holton and William James; editing by William Schomberg and Andrew Heavens)

September 30, 2022
Editorial & Advertiser disclosureEditorial & Advertiser disclosureOur website provides you with information, news, press releases, Opinion and advertorials on various financial products and services. This is not to be considered as financial advice and should be considered only for information purposes. We cannot guarantee the accuracy or applicability of any information provided with respect to your individual or personal circumstances. Please seek Professional advice from a qualified professional before making any financial decisions. We link to various third party websites, affiliate sales networks, and may link to our advertising partners websites. Though we are tied up with various advertising and affiliate networks, this does not affect our analysis or opinion. When you view or click on certain links available on our articles, our partners may compensate us for displaying the content to you, or make a purchase or fill a form. This will not incur any additional charges to you. To make things simpler for you to identity or distinguish sponsored articles or links, you may consider all articles or links hosted on our site as a partner endorsed link.