Home Headlines Republican ‘red wave’ fizzles, but midterm race for U.S. Congress tight
Our website publishes news, press releases, opinion and advertorials on various financial organizations, products and services which are commissioned from various Companies, Organizations, PR agencies, Bloggers etc. These commissioned articles are commercial in nature. This is not to be considered as financial advice and should be considered only for information purposes. It does not reflect the views or opinion of our website and is not to be considered an endorsement or a recommendation. We cannot guarantee the accuracy or applicability of any information provided with respect to your individual or personal circumstances. Please seek Professional advice from a qualified professional before making any financial decisions. We link to various third-party websites, affiliate sales networks, and to our advertising partners websites. When you view or click on certain links available on our articles, our partners may compensate us for displaying the content to you or make a purchase or fill a form. This will not incur any additional charges to you. To make things simpler for you to identity or distinguish advertised or sponsored articles or links, you may consider all articles or links hosted on our site as a commercial article placement. We will not be responsible for any loss you may suffer as a result of any omission or inaccuracy on the website. 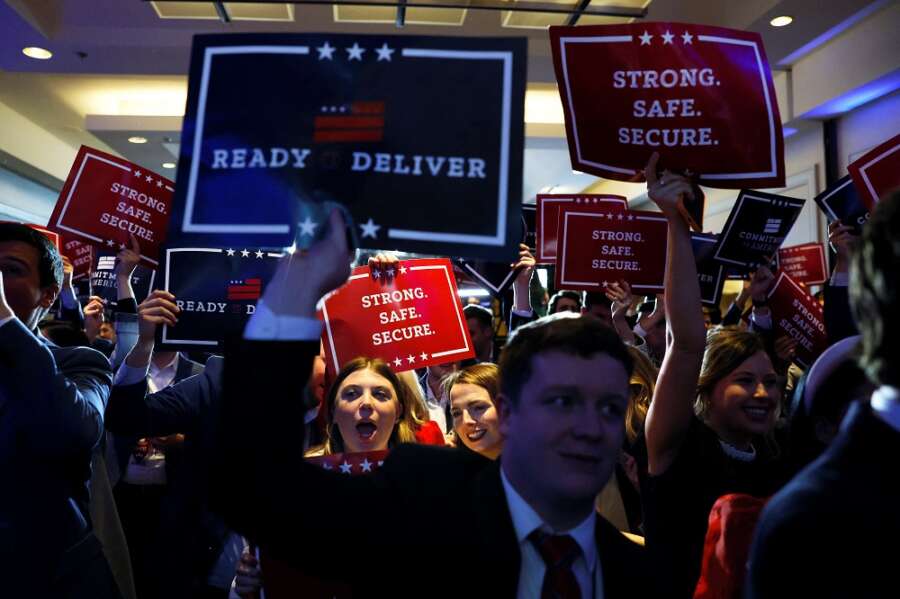 By Gabriella Borter and Tim Reid

BIRMINGHAM, Mich./PHOENIX, Ariz. (Reuters) – Republicans made modest gains in U.S. midterm elections but Democrats performed better than expected, as control of the Senate hinged on three races that remained too close to call on Wednesday morning.

Even a slim majority in the House of Representatives would let Republicans hem in Democratic President Joe Biden during his next two years in office, blocking legislation and launching potentially politically damaging investigations.

But they appeared to be far short of the sweeping “red wave” victory they had sought, as Democrats were avoiding the kind of heavy midterms defeat that often plagues sitting presidents of either party.

Control of the Senate remained unclear, as Democrats picked up a seat in Pennsylvania but awaited results from Nevada, Georgia and Arizona that would define the outcome. Another competitive race broke in Republicans’ favor, as Edison Research projected that incumbent Senator Ron Johnson would win re-election in Wisconsin.

The results appeared to show voters punishing Biden for presiding over an economy hit by steep inflation, while also lashing out against Republican efforts to ban abortion.

Poor performances by some candidates backed by Donald Trump indicated exhaustion with the kind of chaos fomented by the former Republican president, raising questions about the viability of his possible run for the White House in 2024.

“I think his ego is just too big to handle,” said Yvonne Langdon, 75, as she cast her ballot for Republican candidates in Michigan on Tuesday.

Biden had framed Tuesday’s election as a test of U.S. democracy at a time when hundreds of Republican candidates embraced Trump’s false claims that the 2020 presidential election was stolen from him.

A number of election deniers who backed Trump’s claims were elected to office on Tuesday, but fears of violence or other major disruptions by far-right poll watchers at voting stations did not materialize.

By early Wednesday, Republicans had flipped a net six Democratic House seats, Edison Research projected, one more than the minimum they need to take over the chamber. That number could go up or down as more final results roll in.

Control of the Senate would give Republicans the power to block Biden’s nominees for judicial and administrative posts. But in a critical win for Democrats, John Fetterman flipped a Republican-held U.S. Senate seat in Pennsylvania, beating retired celebrity surgeon Mehmet Oz and bolstering his party’s chances of holding the chamber.

The Georgia race appeared to be headed for a runoff vote on Dec. 6 because both the Democratic and Republican candidates were falling short of the 50% needed for victory.

But Democrats also had their share of embarrassments, as New York Representative Sean Patrick Maloney, the chairman of the committee charged with reelecting House Democrats, conceded he had lost his own race.

If the Republicans do take control of Congress, they plan to seek cost savings in the Social Security and Medicare safety-net programs and make permanent tax cuts enacted in 2017 that are due to expire.

Republicans also could engineer a showdown over the debt ceiling to extract major spending cuts, and could pare back aid to Ukraine.

Only 20 of the 53 most competitive races, based on a Reuters analysis of the leading nonpartisan forecasters, had been decided as of Wednesday morning, raising the prospect that the final outcome may not be known for some time. Democrats won 16 of those 20 contests.

U.S. stock indexes fell on Wednesday as the uncertainty weighed on traders’ mood.

The party that occupies the White House almost always loses seats in elections midway through a president’s first four-year term, and Biden has struggled with low public approval.

Trump, who took an active role in recruiting Republican candidates for Congress, had mixed results.

He notched a victory in Ohio, where “Hillbilly Elegy” author J.D. Vance won a Senate seat to keep it in Republican hands. But Oz lost his Pennsylvania Senate race and Doug Mastriano, another Trump ally, was handily defeated in the state’s governor’s race.

Trump allies also were struggling in Arizona, Georgia and Nevada Senate races, where ballots were still being counted.

Thirty-five Senate seats, all 435 House seats and three dozen governors’ races were on the ballot.

(Live election results from around the country are here.)

The primary issue weighing on Democrats was stubbornly high annual inflation, which at 8.2% stands at the highest rate in 40 years.

Voters in California, Michigan and Vermont approved referendums enshrining abortion rights in their state constitutions. Deeply conservative Kentucky looked poised to reject a constitutional amendment that would have declared there was no right to abortion.