US, European shares rise as earnings mixed; euro dives to lowest since 2017

By Chris Prentice and Tommy Wilkes

WASHINGTON/LONDON (Reuters) – Major U.S. and European equity indexes rose in choppy trade on Wednesday, and the euro dropped to its weakest since 2017 after Russia halted gas supplies to Bulgaria and Poland and investors worried more about the region’s economy.

Wall Street rose, rebounding the day after a rout drove the Nasdaq to its lowest close since December 2020.

The dollar continued its surge, on course for its biggest monthly gain since January 2015 as expectations mounted that the Federal Reserve will hike interest rates aggressively in coming months and the U.S. economy will be stronger than the euro zone.

Some of Wall Street’s biggest names have reported results this week, with investors seeking a counterweight to the deluge of negative news that has pounded stocks.

Russia cut the gas flow to Bulgaria and Poland for rejecting its demand to pay in roubles, taking direct aim at European economies. This led investors to sell euros and snap up U.S. dollars.

U.S. Treasury yields slid as data suggested trade dented economic growth last quarter and investors worries about the “restrictive” policy the Fed will pursue next week to combat inflation. [US/]

The U.S. trade deficit in goods widened to a record in March, the Commerce Department said. Trade has subtracted from gross domestic product growth for six straight quarters, the longest such stretch since the beginning of 2016.

The euro dropped as low as $1.0512, its weakest against the dollar since Mary 2017. Analysts cited the war in Ukraine and growing concerns that the bloc’s economy will fall into recession this year.

“The euro’s blatant inability to rally on hawkish comments by European Central Bank members means lingering vulnerability to an external environment negatively affected by an ever-concerning situation in Ukraine and generalized USD strength,” ING FX strategists wrote in a note to clients.

The dollar index measuring the greenback against a basket of rivals, hit a five-year high.

“The U.S. dollar benefits from the prospect of an ongoing flight to safety liquidity bid,” said Jeremy Stretch, head of G10 FX strategy at CIBC. 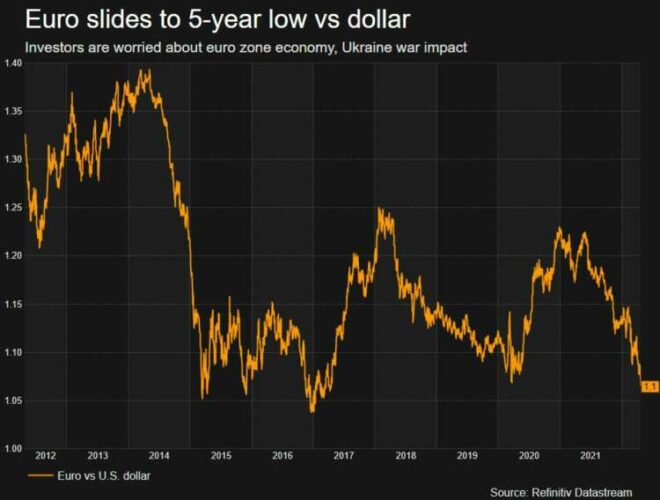 There was more selling in Asia, with MSCI’s broadest index of Asia-Pacific shares outside Japan down 0.82% after hitting its lowest since mid-March. Tokyo’s Nikkei fell 1.17%.

Russia’s move to halt gas supplies to Poland and Bulgaria sent oil and gas prices higher, though not by much.