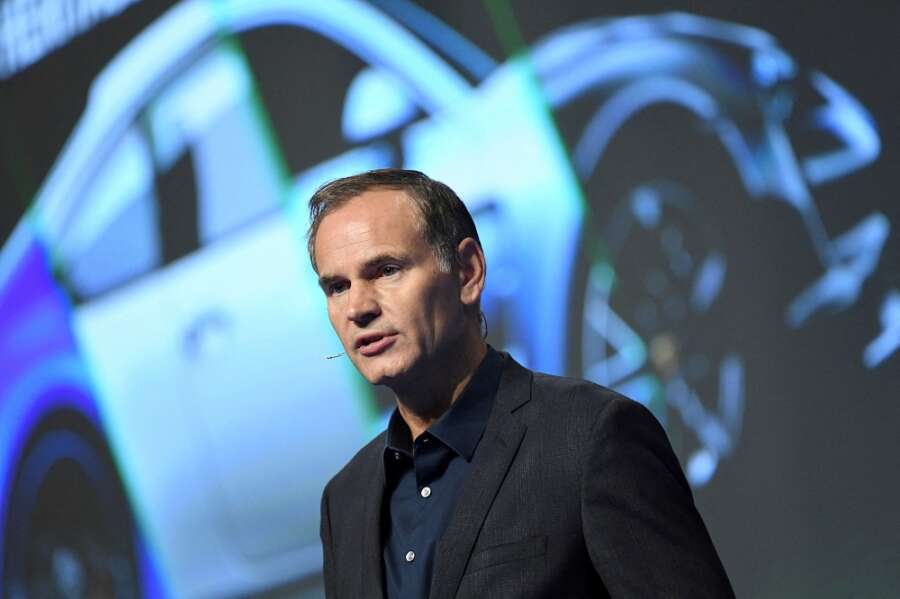 By Victoria Waldersee and Ilona Wissenbach

BERLIN/FRANKFURT (Reuters) -Volkswagen investors believe incoming CEO Oliver Blume will struggle to lead both the Volkswagen Group and Porsche – and to pull off a planned listing of the sports car maker while wearing both hats.

Friday’s announcement that group CEO Herbert Diess would be replaced by Porsche boss Blume has rekindled investor concerns about corporate governance problems at Europe’s top carmaker, which some shareholders have said weigh on the stock’s performance.

“It is poison for the Porsche IPO,” Speich added. Volkswagen plans to list the luxury cars division in the fourth quarter.

Porsche AG may already have to go public at a steep discount if it decides to go ahead with the listing as economic obstacles mount, Reuters reported last week.

Those concerns have been exacerbated by questions over how Blume can manage his dual role.

“Mr Blume will maintain his role as CEO (of Porsche AG) including after a possible IPO,” Volkswagen said on Monday in response to Reuters’ questions.

Diess, meantime, will fulfil his contract that runs until October 2025 but in an advisory capacity, a person familiar with the matter said.

Just days before his appointment was announced, Blume and other Porsche AG executives speaking at its capital markets day sold a possible listing of the sports car brand as a means to give it more independence and entrepreneurial freedom while raising funds for the group.

His dual role calls that independence into question, analysts at Stifel and UBS said.

“Such a double mandate can only exist temporarily in an emergency situation – it won’t work in the long term,” said Ulrich Hocker of the German Association for the Protection of Securities (DSW), which represents retail investors.

Still, most do not at this stage expect a delay to the listing. Some, including car industry veteran Ferdinand Dudenhoeffer speculated Porsche finance chief Lutz Meschke may eventually take over from Blume at the sports car brand.

A person familiar with the matter said it would take a couple more weeks to see what the management changes really meant for the IPO, adding Blume would fill both roles for the foreseeable future.

“We trust Blume with the management of the Group, but it is hard to imagine that he will be able to fulfil the dual role of managing the interests as CEO of Porsche AG and the Volkswagen Group in the long term,” said Hendrik Schmidt, corporate governance expert at asset manager DWS.

Schmidt said that one reason for what he described as problematic decisions was the lack of independent members on Volkswagen’s supervisory board. According to Eikon, DWS owns around 2% of Volkswagen’s preference stock.

In its statement on Friday, Volkswagen did not outline any succession planning for Blume at Porsche.

Volkswagen’s share price has nearly halved since March 2021, underperforming a 17% drop in the STOXX Europe 600 Automobiles & Parts Index over the same period.

The carmaker answers to a complex web of investors – its supervisory board controlled by workers’ representatives and regional government, and a holding company owned by the Porsche and Piech families, staffed in part with Volkswagen executives.

Porsche AG’s Meschke is on the board of Porsche Automobil Holding SE, Volkswagen’s top shareholder and owner of more than half its voting rights, while Volkswagen’s chairman Hans Dieter Poetsch is its CEO.

Tensions over who pulls the strings in Wolfsburg have spelled the end of the road for several Volkswagen executives before Diess, with former CEO Bernd Pischetsrieder and former VW brand chief Wolfgang Bernhard forced out of their jobs in the late 2000s after repeated clashes with the works council.

While Diess is largely given credit for Volkswagen’s pivot to electrification – lifting the carmaker from the reputational ruin of the Dieselgate scandal to leading Europe’s electric car market – the governance issues caused by his confrontational approach to leadership ultimately weighed on the investment case, analysts at Stifel Europe Equity Research said.

Union Investment, which repeated its criticism of Volkswagen’s governance at the most recent AGM in May, declined to comment for this article.