Home Headlines Analysis-Fearing war in Xi’s next term, Taiwan bolsters defences
Our website publishes news, press releases, opinion and advertorials on various financial organizations, products and services which are commissioned from various Companies, Organizations, PR agencies, Bloggers etc. These commissioned articles are commercial in nature. This is not to be considered as financial advice and should be considered only for information purposes. It does not reflect the views or opinion of our website and is not to be considered an endorsement or a recommendation. We cannot guarantee the accuracy or applicability of any information provided with respect to your individual or personal circumstances. Please seek Professional advice from a qualified professional before making any financial decisions. We link to various third-party websites, affiliate sales networks, and to our advertising partners websites. When you view or click on certain links available on our articles, our partners may compensate us for displaying the content to you or make a purchase or fill a form. This will not incur any additional charges to you. To make things simpler for you to identity or distinguish advertised or sponsored articles or links, you may consider all articles or links hosted on our site as a commercial article placement. We will not be responsible for any loss you may suffer as a result of any omission or inaccuracy on the website. 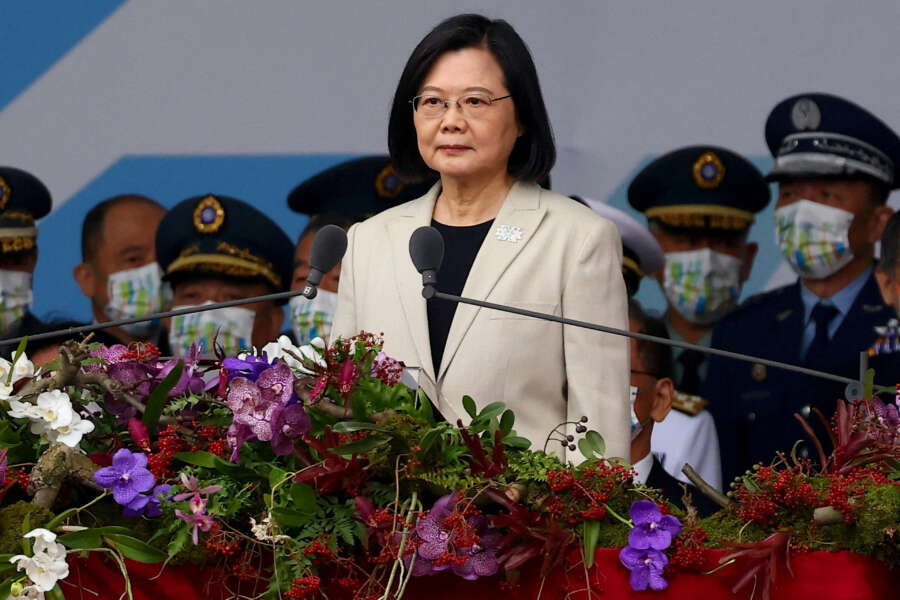 By Yimou Lee and Ben Blanchard

TAIPEI (Reuters) – Taiwan is bolstering its defences and steeling itself for the possibility of war with China as leader Xi Jinping readies to assume a third term in power and tries to achieve what no predecessor has done by taking control of the island.

Xi has made no secret of his desire to make democratically ruled Taiwan a part of the People’s Republic of China – peacefully if possible but with force if needed – to cement his legacy in the history books.

China’s war games near Taiwan in August pushed tensions to their highest in decades, reigniting fears of conflict that have loomed ever since the defeated Republic of China government fled to the island in 1949 after loosing a civil war to Mao Zedong’s communists.

President Tsai Ing-wen in her national day speech on Monday said war was “absolutely not an option”, which a source familiar with her thinking said was aimed partly at China’s ruling Communist Party congress, which opens on Sunday.

She also outlined steps to boost the military including with mass production of precision missiles and warships.

“Through our actions, we are sending a message to the international community that Taiwan will take responsibility for our own self-defence, that we will not leave anything to fate,” she added.

Xi is widely expected to win his third term at the one-every-five-years party congress.

While Taiwan has lived with the threat of Chinese invasion for more than seven decades and there is no sign of public panic at Beijing’s bellicosity, government officials are alarmed, and offer a stark analysis in private.

“Now we should be abandoning our illusions and preparing to fight. We really need to be prepared to fight,” said a Taiwanese source familiar with the government’s China policy, speaking on condition of anonymity as he was not authorised to discuss intelligence assessments with media.

Tsai has made modernising the armed forces a priority, to develop what she said this week was “comprehensive asymmetric warfare capabilities” with small, highly mobile precision weapons such as anti-ship missiles that can be launched from the back of a truck and moved to safety after firing.

Xi was trying to push China’s global influence and attain goals not achieved by his predecessors, including by bringing Hong Kong to heel, Lin told Reuters at party headquarters in downtown Taipei.

“When we say achievement, for Taiwan it’s definitely not a good sign, it’s not a good thing,” Lin said.

“I do think that in the next five years it will be more intense for cross-strait relations, it will be more unstable and also the tensions across the Taiwan Strait will escalate to a different level.”

Any war could devastate the global economy, given Taiwan’s key role as a semiconductor producer, and potentially drag in the United States, whose President Joe Biden pledged last month to defend Taiwan in the event of any “unprecedented attack” by China.

“We will not be provocative. We will not let him use it as an excuse.”

China’s Taiwan Affairs Office did not respond to a request for comment.

Last month it reiterated a pledge to achieve peaceful “reunification” under the “one country, two systems” model of autonomy used for Hong Kong, though that has been widely rejected in Taiwan.

In one aspect on Taiwan, Xi already made his mark on history by meeting with then-Taiwan President Ma Ying-jeou in Singapore in 2015, the first such get together since the Republic of China government fled to Taiwan in 1949.

But China has refused to speak to his successor, Tsai, since she was first elected in 2016, believing her to be a separatist. Tsai has repeatedly offered talks on the basis of equality and mutual respect.

China has not come up with a timetable for “resolving the Taiwan issue” as Chinese officials term it, but Xi said in his first year as president in 2013 that a political solution could not wait forever.

Huang Kwei-bo, an associate professor of diplomacy at Taipei’s National Chengchi University who was part of Ma’s delegation to the Singapore summit, said Xi would likely want to get Taiwan under his control sooner rather than later.

“Because the later the two sides get unified the greater cost Beijing is going to pay for national unification,” he told Reuters. “Xi Jinping, I think, in his mind, sooner is better than later.”