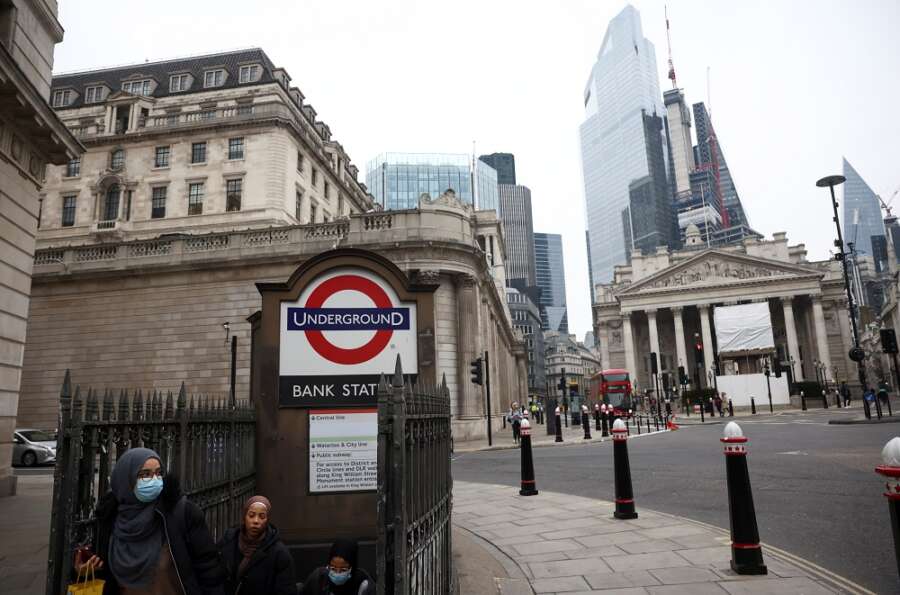 LONDON (Reuters) – The Bank of England raised interest rates on Thursday in a bid to keep fast-rising inflation in check but, with the economy facing a huge hit from soaring energy prices, it softened its language on the need for further increases.

Eight out of nine members of the Monetary Policy Committee (MPC) voted to raise Bank Rate to 0.75% from 0.5%, following the U.S. Federal Reserve’s decision on Wednesday to raise borrowing costs for the first time since the COVID-19 pandemic.

Deputy Governor Jon Cunliffe voted to keep rates on hold, warning of a big hit to demand from higher commodity prices. Economists polled by Reuters had expected a unanimous vote for higher rates.

MONEY MARKETS: Bond markets trimmed their expectations on the amount of rate hikes for the rest of the year with the Bank of England’s next meeting in May no longer signaling a full rate hike.

“With inflation so high it would be tempting for the MPC to really assert themselves with a sharper rate increase but since the invasion of Ukraine a more cautious approach has won out.

“It’s debatable whether the next 25 bps rate hike will be May or June, and (the BOE) is likely to pause thereafter. It may indeed be the case that they could signal a pause in May, given that the Bank’s Agents will be put on high alert to monitor reaction to April’s household energy price hikes, National Insurance and Council Tax hikes.”

“In contrast to both the U.S. Federal Reserve and the European Central Bank, the Bank of England delivered a relatively dovish message to investors today. Going into the meeting, the market was already pricing in more than six 0.25% hikes by the end of 2022, thereby taking the Central Bank rate to around 2% with the potential for more.

“However, with the vote being 8-1, and the lone voter being for no change, there was more of a focus on slower growth and its impact on households going forward. Gilt yields should now be more supported, thus reducing further concerns around sizeable moves higher in yield in the near term.”

“The minutes highlight the ongoing inflationary pressures facing the UK economy and the tight labour market. Given this backdrop, we expect the Bank to hike rates again at its next meeting in May, taking base rates to the 1% mark.

“In our view, with the Bank of England likely to deliver further hikes in the coming months, we expect sterling to recover as the year progresses and still look for the pound to finish the year higher than where it currently sits.”

“Clearly the deteriorating growth outlook is becoming more of a concern to the MPC, and the easing off on the monetary tightening accelerator evidences this.

“Alongside this, the MPC may also be recognising that current inflationary pressures are largely supply-side driven and as such there is little the MPC can do to fight them, and concluded that the deflationary impact of the fiscal tightening facing the UK from this April will be enough to counter the inflationary boosting potential of higher wages claims.”

“Obviously with the fact that we have a conflict in Ukraine going on and its impact on global growth, maybe the move is a little bit more dovish, but I don’t believe that the expectations have changed for the Bank of England.

“No surprise in the decision from the BoE to hike today, however the dissent from Cunliffe provides a dovish tilt and has prompted traders to revise bets on the pace of future rate hikes, immediately weighing on sterling strength.”

Ukrainian refugees hope for peace, but more expected to flee