Home Headlines Can crowdfunded property turn rundown neighborhoods around?
Our website publishes news, press releases, opinion and advertorials on various financial organizations, products and services which are commissioned from various Companies, Organizations, PR agencies, Bloggers etc. These commissioned articles are commercial in nature. This is not to be considered as financial advice and should be considered only for information purposes. It does not reflect the views or opinion of our website and is not to be considered an endorsement or a recommendation. We cannot guarantee the accuracy or applicability of any information provided with respect to your individual or personal circumstances. Please seek Professional advice from a qualified professional before making any financial decisions. We link to various third-party websites, affiliate sales networks, and to our advertising partners websites. When you view or click on certain links available on our articles, our partners may compensate us for displaying the content to you or make a purchase or fill a form. This will not incur any additional charges to you. To make things simpler for you to identity or distinguish advertised or sponsored articles or links, you may consider all articles or links hosted on our site as a commercial article placement. We will not be responsible for any loss you may suffer as a result of any omission or inaccuracy on the website. 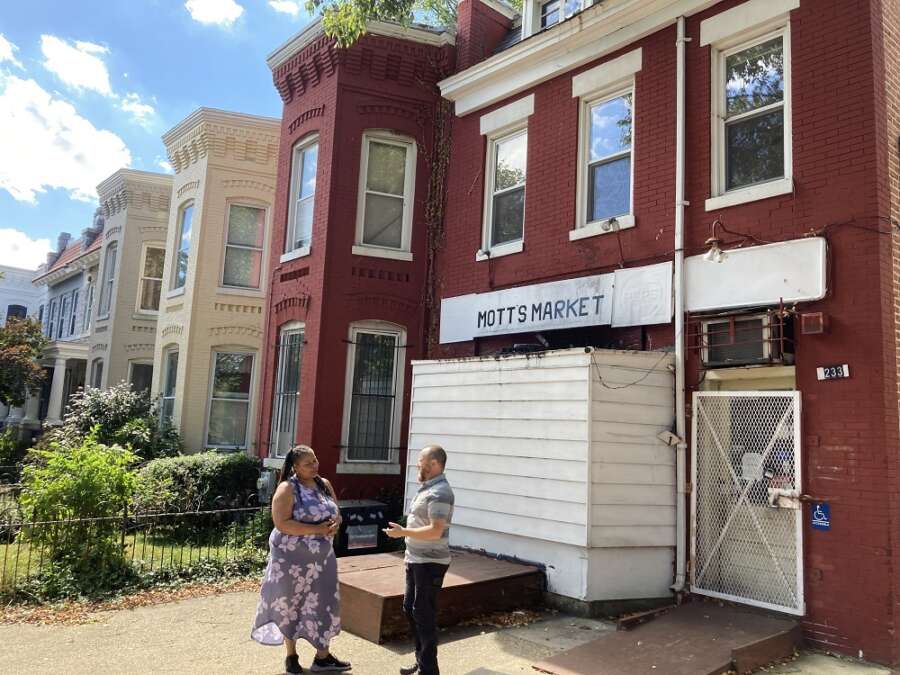 WASHINGTON (Thomson Reuters Foundation) – When residents of a quiet neighborhood in Washington D.C. heard their century-old corner store would be shut down and sold, they reeled in disbelief for a few days – then went all out to save it.

“It’s always been here,” said Christine Campbell, 57, a third-generation resident whose home is just down the street from Mott’s Market.

Mott’s, she said, was stitched into her daily routine, as it was for many in her Capitol Hill neighborhood.

“From any memory I have, it was running to the corner store to pick up bread, pick up milk â€“ just all of the basics,” she told the Thomson Reuters Foundation, standing outside the small, two-story brick building, its door locked since March.

That door may soon be unbolted.

Next week, Campbell and about 40 other investors get to buy the building, after a blitzkrieg of yard signs, online campaigning and door-to-door mobilization.

“It took a crowd of people.”

The Capitol Hill campaign was a labor-intensive one-off, but the idea of harnessing small-scale investors for real estate development is gaining momentum nationally, boosted by digital platforms and federal rule changes that that green-lit such financing then raised the cap on what developers could raise.

Backers say the approach opens up real estate investing to a broader pool of buyers and gives locals a say in neighborhood investments – and a stake in any profits, too.

“Real estate has traditionally been left to those who already have money to make more money. And crowdfunding gives you a platform to democratize that,” she said.

“This is one way to really ensure the community gets to participate and benefit from what’s being created, and to have a sense of ownership.”

Crowdfunded real estate took off after a law change went into effect in 2016 that liberated U.S. investments from the books of accredited advisers, opening deals to new players.

Globally, crowdfunded real estate is expected to grow to nearly $869 billion in 2027 from $13.2 billion in 2018, according to market researchers Facts and Factors Research.

He crowdfunded part of the purchase of Walbrook Junction, a 40-year-old shopping center in Baltimore that he said was once a center of the Black community but has seen major decline.

Now the idea is to resuscitate Walbrook Junction and breathe life and wealth back into a rundown neighborhood.

Richardson held more than 60 meetings with religious groups, parents, senior citizens and other locals to spread the word.

Eventually, 130 Black investors wrote checks ranging from $1,000 to $50,000, Richardson said – and “nine in 10 are individuals that care about the neighborhood or have some connection to the neighborhood.”

He is also applying for city funding and says the crowdfunding will help: “It’s me and 130 local Black investors saying it’s important for neighborhood revitalization.”

Social entrepreneur Jeff Billingsley said he jumped at the opportunity to invest in Walbrook Junction – as did a relative, after he shared details on social media.

“People normally don’t know about things of this nature happening in communities of color. This is a solution to have ownership in something you can say is helping to improve the economy of urban communities,” said the 54-year-old.

‘IN YOUR OWN BACKYARD’

A few miles east, Joanna Bartholomew also used crowdfunding to raise capital for Aruka Midway, hoping to restore a run of 23 Baltimore row houses that have sat vacant for decades.

“We did it with the purpose of showing people you can have a stake in the neighborhoods you’re from, or neighborhoods that remind you of where you grew up,” said Bartholomew, chief executive of O’Hara Developments.

“That you’re able to invest in your own backyard.”

It was her first try at crowdfunding – Bartholomew said it took way more work but brought in nearly 80 new backers.

Both Bartholomew and Richardson raised capital through an online platform called Small Change, which architect and urban designer Eve Picker launched in 2016.

The platform has helped raise $11 million to build housing for homeless people, turn empty buildings into corner shops, put retail in food deserts “and everything in between”, she said.

Over half the developments are owned by women or minorities, Picker said, and most would not have drawn traditional capital backing, which generally prioritizes quick returns.

“Projects like these require patient money and a long-term hold,” she said. “You have to wait while the neighborhood catches up.”

Still, crowdfunded real estate remains a niche business, with developers limited in how much they can raise.

Some platform-based investing has also drawn fire for snapping up housing for investors rather than for home buyers.

In Los Angeles, a crowdfunding platform called Fundrise is seeking to corral investors to revitalize an entire neighborhood.

Unlike Small Change, which acts only as a platform, Fundrise raises money for its own development work.

“We build new housing, we redevelop under-utilized budlings, we develop and add productivity, and then the investors get the benefit of that,” said chief operating officer Brandon Jenkins.

After a decade in business, it has nearly 350,000 investors and $3 billion in equity, he said.

In the Los Angeles neighborhood of West Jefferson, Fundrise has purchased a dozen properties and is redeveloping them into spaces that can host restaurants, bookstores, creative businesses and more.

More than 20,000 investors are involved in what the company estimates will be a decade-long, $120 million project, he said.

“We have a lot of investors who live in Los Angeles and love that they understand where these projects are,” Jenkins said.

“Others don’t and are in it for the investment return, but they tend to have a little more pride of ownership in what they’re investing in,” he said.

Back in Washington, Mott’s Market supporters echoed those sentiments; nobody is expecting to hit jackpot.

“We knew there was no quick return,” Campbell said. “We were all investing in community.”

Historic crown to be modified for King Charles’s...

December 5, 2022
Editorial & Advertiser disclosureEditorial & Advertiser disclosureOur website provides you with information, news, press releases, Opinion and advertorials on various financial products and services. This is not to be considered as financial advice and should be considered only for information purposes. We cannot guarantee the accuracy or applicability of any information provided with respect to your individual or personal circumstances. Please seek Professional advice from a qualified professional before making any financial decisions. We link to various third party websites, affiliate sales networks, and may link to our advertising partners websites. Though we are tied up with various advertising and affiliate networks, this does not affect our analysis or opinion. When you view or click on certain links available on our articles, our partners may compensate us for displaying the content to you, or make a purchase or fill a form. This will not incur any additional charges to you. To make things simpler for you to identity or distinguish sponsored articles or links, you may consider all articles or links hosted on our site as a partner endorsed link.