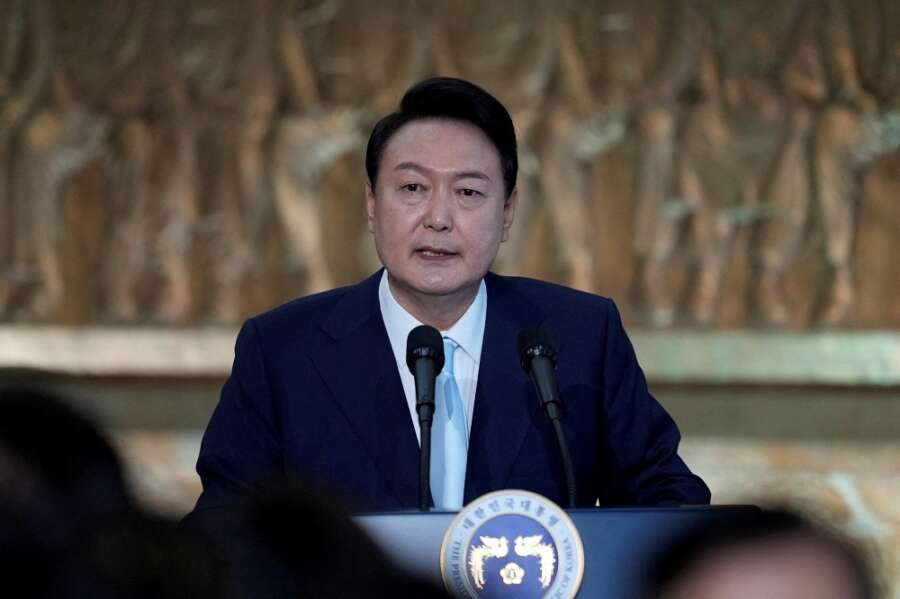 SEOUL (Reuters) -South Korean President Yoon Suk-yeol’s plans to offer economic aid in return for denuclearisation could face an early challenge amid signs of an imminent North Korean nuclear test – and such proposals have been rebuffed before, analysts say.

Yoon has warned of a “tense” security environment, citing the possible nuclear test, which U.S. and South Korean officials have said could occur as early as this month after Pyongyang broke a 2017 moratorium on long-range missile testing in March.

Analysts say such a test, the North’s first in five years, would be a reality check for Yoon’s plans to incentivise denuclearisation with “audacious” economic benefits, unveiled in his inauguration speech on Tuesday.

Yoon and his team have given few details on how they would bring back Pyongyang to the negotiating table. But some analysts said North Korea is unlikely to accept any aid-for-denuclearisation deal, as its nuclear and missile programmes are mature and still advancing.

“It was a somewhat conciliatory message, but North Korea would never accept this line of reasoning that the South would help develop its own economy if it denuclearises,” said Park Won-gon, a North Korea expert at Ewha Womans University in Seoul. “To them, that formula means to deny their regime.”

Pyongyang has said several times in the past decade that it would not abandon its nuclear programmes in exchange for economic rewards, Park added.

Yang Moo-jin, a professor at the University of North Korean Studies in Seoul, noted a similar offer by former conservative President Lee Myung-bak.

Lee, under his “Vision 3000” initiative, had promised economic assistance to help the North achieve a $3,000 per capita income within 10 years if it abandoned its nuclear and missile programmes and opened up to the outside world.

Pyongyang called it a plot to overthrow its regime, and inter-Korean ties remained icy throughout Lee’s five years. Many of Yoon’s senior aides, including his national security adviser and his deputy, served in the Lee administration.

“The new government’s offer could induce backlash from the North,” Yang said. “He does leave open the door for dialogue but did not actually propose talks, and the idea would have slim chances of succeeding as it’s passive and unrealistic.”

Yoon on Wednesday nominated Kim Kyou-hyun, a former veteran diplomat with expertise in North Korea and U.S. relations, to be director of the National Intelligence Service, overseeing oversee inter-Korean affairs and denuclearisation talks.

“The security situation on the Korean peninsula is extremely grave due to North Korea’s advancing missile threats and possibility of a nuclear test,” he told the meeting.

Lee ordered the military to respond “sternly and immediately” if the North presses ahead with a “direct provocation,” the ministry said in a statement.

Norway to ramp up offshore wind in drive to go green